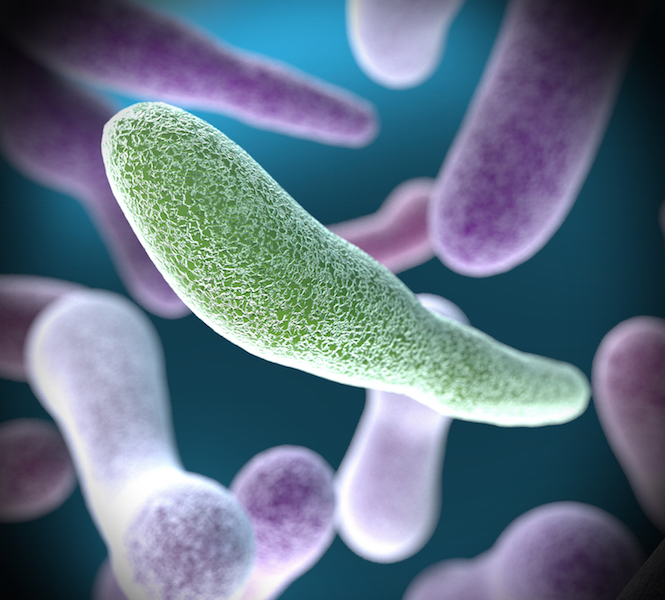 B acteria vastly outnumber human cells within our bodies. Strange but true. Bacterial cells are much smaller than our own cells and therefore do not take up as much space.   Watching the explosion of antibacterial handwashes and cleaning products one would be forgiven in thinking that we need to wage war on these organisms. As a balanced part of the diversity of life that creates the human form, they are indispensable to our health. If they become disproportionate or proliferate in parts of our body that they wouldn’t normally be found in such numbers, then our health can be disturbed not just physically but also mentally and emotionally. In my clinic there have been a number of clients, both old and new that I have identified as needing a homeopathic nosode made from one of the bacteria that naturally find a home in our digestive system or mucus membranes.

There are several specific situations that will lead a homeopath to think of a bowel nosode for a client and their presenting symptoms. Let me give you the basic criteria that would indicate a bowel nosode could be needed to help correct a health imbalance.

Some of the bowel nosodes actually have specific mental and emotional pictures that indicate they could be useful. The more I have delved into understanding this remedy group, the more I am amazed at their potential to help many people and I wonder if they could be under prescribed by homeopaths in general.   There are bowel nosodes that have strong anger and depression in their symptom picture and there are others that have anxiety and fearfulness. How many people out there are up to their eyeballs in prescriptions for anti-anxiety medications and depression medications when their imbalance of digestive bacteria may be one of the subtle causes. Many of my clients who have responded well to a bacterial nosode have already been conscious of their nutrition and eat a healthy diet, however it wasn’t until the nosode was prescribed that great strides forward was made in their cases.

Here are two cases to illustrate how bowel and bacterial nosodes have been used in my clinic with great success, improving symptoms and often moving forward chronic cases in a much deeper manner so that the client seems to be able to respond to other remedies with greater benefit afterwards.

Case #1: A 41 year old female that presented with symptoms that resembled underactive thyroid or prediabetic symptoms. There was extreme difficulty controlling her weight. It didn’t matter if the diet was healthy or restricted – she was completely unable to lose her weight that was centred in the abdominal region. If she slipped up on her healthy diet and ate an extra slice of pizza, she could easily gain up to a kilo of weight almost overnight. Two years previously, she’d had terrible diarrhea from antibiotics prescribed for a respiratory complaint. Since then her bowel motions had never been quite the same and she had begun to struggle with her ability to lose weight. I spoke to her about a possible wheat intolerance contributing to her trouble with her abdominal weight gain. She also spoke about her difficulty with her irritability at home with her family members. It seemed to be an extreme reaction to very small incidents. Since the antibiotic reaction, she had found that her mind didn’t seem to be as agile as before with difficulty thinking and a general fogginess.   She also said that she ate eggs everyday and often craved them. When I delved into her medical history a bit further, I discovered she had been on antibiotics repeatedly, just about every month or so from 6 months old until she was about 14 years old for bronchial complaints and tonsillitis.

I prescribed Proteus in homeopathic potency which is a bacteria that lives naturally in the small intestines.  Bowel nosodes can be extremely powerful in their reactions when prescribed and I only repeat the dose if needed. After her first dose of Proteus, this client slept deeply and found that her energy levels were markedly improved. She found herself not craving eggs so much and she had the energy to begin to remove wheat from her diet. I repeated the Proteus when the improvements halted and after the second dose she began to get what felt like her tonsillitis symptoms when she was a child. The same sensation of pain, but milder, in her throat. A few days later she began to develop a cough.

The cough was not resolving on it’s own and she was concerned that it seemed to be affecting her breathing in the evenings. Again, the symptoms were similar to her repeated bouts of bronchitis as a child. I took her symptoms and prescribed Pulsatilla for her ailments and the cough did not descend any deeper into her chest and after a few days began to resolve. What was remarkable was that after her cough went and she regained her health, she noted that her mind was clearer than it had been for years. She was able to think easily and had continued sleeping restfully. She dropped two kilos that had been previously impossible to shift. The thing that she loved the most was the improvement in her temperament. She found that her irritability was gone and replaced with a sense of serenity. She was able to respond from this calmer space to life’s daily tribulations instead of becoming wound up inside and irritable.

In homeopathy this is a clear case of an old layer of illness presenting clearly to be treated.

Case #2 :  A male presenting with recurrent boils that were not responding to other forms of treatment. I began treating with the typical remedies in homeopathy that treat boils, hastening their suppuration and healing process as well as strengthening the body’s immune response so that the boils eventually appear less often and then disappear. However, in this case, the boils began appearing with another symptom from years ago where the client had been hospitalised with right sided pains in his abdomen. The client was thoroughly checked over at the time. It was decided that it wasn’t appendicitis and that a reason could not be found for the pain. This client lived on painkillers with each attack of this severe pain in his abdomen.   This went on for some months at the time. Again Proteus matched the location of the abdominal pain and the location of the boils on the body and so I prescribed it as the normal remedies for boils were not having the desired effect. The client had a dose in my clinic and within minutes the abdomen pain began to ease and he repeated the dose whenever it appeared again. After this, the boils began to lessen and respond to the appropriate homeopathy remedies and the client became healthier overall.

Interestingly, the homeopathic remedy Proteus has in it’s mental symptom picture a feeling of nervous tension and ‘stress’. It is common to see in the history of someone needing Proteus some kind of situation where there was chronic, long term stress and that the client had to not show their inner reaction. It is a situation where they must show their ‘good face’ and not let on what they are truly thinking or feeling. This could be in the home as a child or as an adult in the work-place. This situation, I think, is probably exceedingly common in our current modern life. Combined with the common use of antibiotics this bowel nosode may be well indicated for a number of people. Certainly, if you relate to any of the indicators above then I recommend consulting a homeopath as bowel nosodes must be used gently and only when well-indicated as they can powerfully stir up the body’s healing response bringing to the surface old symptoms and disease states that may need to be addressed separately.