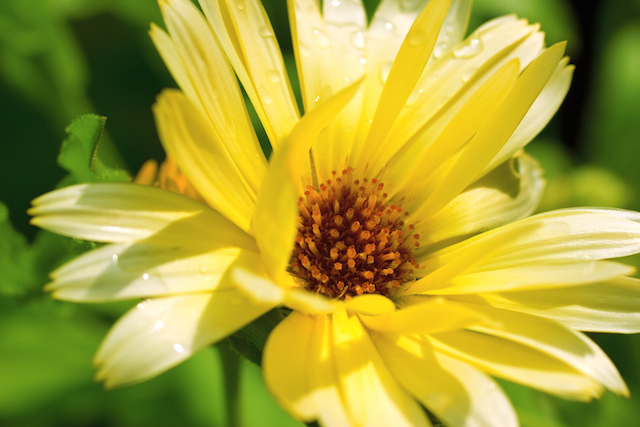 P racticing homeopathy means that you never finish learning.  One remedy that is used by homeopaths and home prescribers alike is Calendula (Marigold).  Homeopathically, it is used to heal grazes and wounds.  It comes in the form of a topical tincture, cream or oral doses in the form of pillules or liquid.  Always make sure the wound is clean before you give this remedy so the skin does not heal over any dirt.  Calendula is a staple in my household.  It is invaluable for those really painful little grazes that children are so prone too, such as when they skin their knees while playing.  Often one dose orally is all you need and the pain is instantly soothed and the person very quickly puts their mind back on the task at hand.

The advantage of giving the dose orally in first aid is that it helps to ease the mental/emotional shock of the injury.  The body can then turn its energies to the rapid healing of the physical tissues.  Calendula comes from the same family of plants as Arnica.  Each plant from this family has a common theme of being able to stimulate the body to heal and soothe injuries and what differentiates which remedy to give is the person’s response to their injury.  A person with a concussion who says “I’m fine, I don’t need a doctor” is often the person who does need Arnica.  However Chamomilla, another remedy from the Asteraceae family, will get very angry and irritable with their injury which is commonly teething pains.

Calendula has a slightly different response to injuries. This remedy has a distinct personality profile which is easily seen in a child and I will attempt to portray this remedy as I have seen it in two cases in my clinic.  The names have been changed for confidentiality reasons.

This was a series of acute consultations for what seemed like a simple cough at first.  Billy (4 years) had already been seen by Sue Spurling, another practitioner in my clinic who initially had prescribed Opium for the initial severe fright from a fall and then Calc carb for the cough. The cough had improved initially but then improvement had ceased.

The first thing I noticed was that Billy had a sizeable bright pink patch of newly healing skin under his nostril. It was the beginning of winter and the cough was frequent and loose sounding but no real expectoration was forthcoming.  The cough came deeply from the stomach and was much worse for lying down in bed at night, worse for cold air and exertion. His left ear was red externally and his nose had a watery, thin discharge that was worse when coughing.  The cough had begun shortly after his fall while running.  His face and elbow took the brunt of the fall on the concrete.  The patch of skin beneath his nose was taking a long time to heal. He had just started kindergarten and was nervous about making friends.  This boy was fearful of dogs.  He was also disturbed by the slightest noise at night and always wanted company.

I prescribed Phosphorus; a main cough remedy in homeopathy which seemed to match the symptoms.  The response was less than expected but in the meantime we had just been to a conference where we had heard about the mental/emotional symptoms of Calendula and Sue and I had an idea that this was a relevant remedy.

We found out that this little boy was actually quite fearful of dogs, noise and the dark.  He lacked self-confidence at kindergarten and would often be found close to the teacher.  Billy had been at kindergarten for a few months and was clearly nervous about making new friends and trying new things.  He was a sensitive boy and concerned about others being hurt.  The newly healed skin under his nose was still very pink. I asked if he had been given Calendula when he fell but he had not.

He took this remedy every 2 or 3 days for quite a few doses over a period of 2-3 weeks.  His cough began to dry up, the skin beneath his nose started to heal more rapidly and his confidence grew at kindergarten. He began to move away from the teacher a bit more and venture towards making friends and becoming involved in more activities.

Over the course of winter he had further homeopathic treatment at the clinic and his chest continued to strengthen but it was after the Calendula in particular that we really began to notice significant changes with his cough.  The shock of his fall and injury had clearly still been affecting his body’s ability to heal itself.  Calendula enabled Billy’s body to throw off the fright of the fall and he was able to overcome his acute illness and grow in confidence.

Ruby was a very sweet, caring little girl.  She would stop and hold up her hands as if shielding herself if another child came running too close to her.  She was not confident in climbing and doing physical activities.  She was nervous that she might hurt herself.  Her cough started directly after being punched at kindergarten by another child.  This cough persisted for many weeks, only changing its symptoms with several remedies and even antibiotics, but not improving.  Calendula 200c made a significant difference to the cough and also her anxiety about going back to kindergarten due to the trauma of being hurt.

In homeopathy it is invaluable to look at the cause and stressors around the beginning of an acute.  In the above cases the stress for each child was injury.  This is where having a good homeopathic first aid kit on hand at home and using the remedies at the first sign of injury may prevent other illnesses appearing in relation to the shock of the injury.